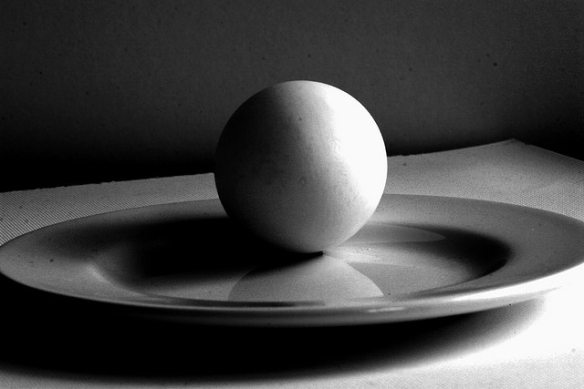 I had not seen the work of Czech photographer Josef Sudek, “The Poet of Prague,” before I created my own photo of an egg and its shadow. Sudek’s development as a photographer is an interesting story, but his work speaks for itself…..beautifully, wonderfully poetic.

In an article that Charles Sawyer wrote for Creative Camera in 1980, he describes Sudek’s photographic aesthetic perfectly, “The eye is usually accustomed to seeing not light but the surfaces it defines; when light is reflected from amorphous materials, however, perception of materiality shifts to light itself. Sudek looked for such materials everywhere. And then he usually balanced the ethereal luminescence with the contra-bass of his deep shadow tonalities.”

In Sudek’s own words (taken from the text accompanying a short video tribute to his work set to music):

” I believe that photography loves banal objects, and I love the life of objects…”

” Everything around us, dead or alive, in the eyes of a crazy photographer mysteriously takes on many variations, so that a seemingly dead object comes to life through light or by its surroundings…. To capture some of this – I suppose that’s lyricism…”

The banal through the eyes of Sudek…….exquisite visual poetry.

3 thoughts on “The Poet of Prague”