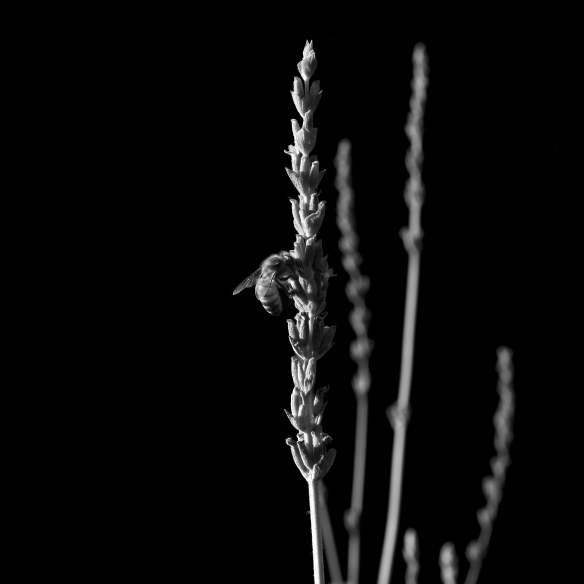 I never thought I’d have the chance to learn beekeeping, particularly in the Los Angeles area, but the Los Angeles County Beekeepers Association offers classes on beekeeping. Who knew? For $10 per household, which procures membership in the association, you have free access to these classes, most of which are held at Bill’s Bees, Bill Lewis’s bee yard in the hills of the Angeles National Forest. I was amazed at how many people showed up for the class on the first day. Bill’s Bees is tucked back into a canyon, down a narrow, winding, partially paved road, and yet we found ourselves in a long convoy all heading for the same destination. After the cluster of chairs in a barn-like structure filled up, it was standing room only for everyone else, close to 100 people altogether.

Bill and his fellow beekeepers are experts on bees and there is much to learn. Many attendees took notes, including myself. The first two classes were mainly instructional with some demonstrations on how beehives are constructed. It was the third class that I was longing for, where we would have to wear bee suits as we’d be introduced to the bees themselves.

Mark Winston says in his book, Bee Time, “Walking into an apiary is intellectually challenging and emotionally rich, sensual and riveting.” He’s not kidding. It’s a full-body experience, walking up to an open hive where hundreds of bees fill the air with the vibrations of their buzzing, where you smell the thick, sweet aroma of wax and honey. It’s hypnotic, watching the intricacies of their flight patterns as they exit and enter the hive. They are all around, bumping into my netted hood, landing on my suit, although miraculously, they don’t bump into each other. It was hard to get close to one of the many hives for very long given how many people were there in their suits. One woman started hyperventilating with panic in the midst of so many bees. I wanted to sit down and let myself be lulled into a nap by their collective hum. When I was finally able to get close to one of the open hives, I got to hold one of the frames, covered with bees and wax. There were bees attending to newly emerging bees…..bees being born before my eyes. Leaning in closer, we got to hear the individual song of the queen deep in the hive.

Although it’s not practical to keep a hive on our own small property, it was worth it just to stand in the midst of so many bees, like being invited into an exclusive club. I’ve been able to do that, on a less numerous scale and with less fear of being stung, with hoards of hummingbirds flying in and around our backyard feeders. The bees are a more intense crowd, driven by a collective purpose. I was merely a privileged observer.